The British government has announced a cabin baggage ban on laptops on direct passenger flights to the UK from Turkey, Lebanon, Jordan, Egypt, Tunisia and Saudi Arabia.

The ban, which also applies to tablets and DVD players, follows a similar US move affecting eight countries.

The ban applies to any device larger than 16cm long, 9.3cm wide or 1.5cm deep. Whilst it does include smartphones, most fall within these limits. 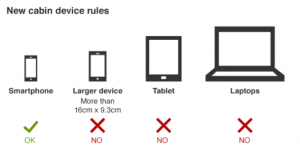 Which airlines are affected?

Whilst these are the current guidelines, please don’t hesitate to contact a member of our corporate team for clarification and the latest information. You can call us on 0191 285 0346 or send an email to business@travelb.co.uk.

Back to overview < prev next >